It's been awhile since I've posted one of my full, weekly updates and, since there's been a shift this week, I think it's a good week to make that happen :)

The bumps are getting smaller :)  This week, someone in Istanbul stole my Facebook password which I used in several other online places like iTunes and Amazon.  So, I got to do some password changing, but that was only an hour or so, and most of this week has really felt like I'm turning the corner on that state of always being precariously close to the edge of overwhelmed.  I think we finally have a workable, interim solution for teaching my classes which involves a parking lot, a lap top, and a library study room.  Andrew is also saying that our neighbor with a line of site to the WiFi hub has been scouting out trees that could host a receiver for us (and let me teach from home)!  Andrew has also had an exciting week at work with the first release of their product to in store testing and his company wide talk on GTD being well received.  Cameron has had only minimal bumps with his first week of school and seems to be well matched with a considerate teacher.  The construction guys have repaired the deck and will start on the roof Monday; they're estimating being done in 2-3 weeks.  Andrew is also following up with the plumber to get those tubs fixed and I'm following up with a water treatment guy who can resolve the hard water issue in the house that has damaged so many of the fixtures as well as the water using appliances (hot water heater, dish washer).  So… we're moving forward!  Andrew and I even squeezed in a little grading for the Ayn Rand Institute's essay contest, but we both had to pass on doing more than one round.  There's still much to do, but we're hoping the open boxes throughout the house will be banished to the garage, deck, or storage area by the end of the weekend and then we'll really feel more settled!  And… we also had a weekend adventure as a family!  We went to Napa and enjoyed a cozy visit with the Cordairs and a lovely dancing /appreciating visit to their gallery.   It was good to get away from the house whirlwind for 24 hours :)

Cameron analyzed one of the gallery paintings with me and came up with this statement: A mysterious lady with an inscrutable expression relaxes and thinks about something important.  (It was a painting of a lady in a yellow blouse that he picked to try and understand better.  By the end, I'd seen much more than my first pass and it was really cool.  By the way, he loves the word "inscrutable".)

Got the smog check and CA license plates for both cars

Successful dinner outing and trying out a new babysitter

Scrumptious Indian dinner in Napa, I don't think I've ever enjoyed goat curry like that anywhere else!

Glorious, morning stroll in a Napa neighborhood… stuck my nose in lots of roses :)

Andrew got the little bronze that he had been desiring for over a year and we're planning on my getting a print that I've had on my mind for more than five years… fun housewarming gifts to ourselves.

Cameron said he thought he made one friend on his first day of school "It's quite a coincidence that his name is also Cameron."

Our new cleaner is awesome and even though there are still boxes in many rooms and I did extensive cleaning already, it felt good to have that whole house professional feel!  (I really appreciate that help for the deep cleaning.)

I'm getting more tutoring with Lindamood Bell scheduled, but much less intensity/frequency (just a couple hours each week and focused where he needs it… writing)!

It seems like I finally found a decent employee at the store that sent us the dented fridge, she says one week to get the new door (the other contacts I've had have already been dragging their feet for a month).

Picked up some mended pants for Andrew which were well done, so now I've found a local seamstress

Cameron was in tears when I picked him up because of their rules restricting where he could wait, but I got him calmed down and happily contemplating how he'd coordinate the traffic if he were principal

Although I couldn't take a bath because we discovered the other tub stopping mechanism is broken too, I snuggled up in a newly washed blanket for relaxing time

Here's to relaxing and enjoying and getting through the stressful times with aplomb :)

P.S. Cute antics:
• responding the reminder to dry his hands well with a vigorous scrub on the sweat shirt.
• choosing "Betsy the anaconda" when we were contemplating what wild animal we'd like to have as pet if it could be tamed.  (The family came to the conclusion she wouldn't be very good at guarding the house because she'd eat one robber and go to sleep for a month.)
• insisting that we stand guard at the restaurant to make sure no one tried to come into the bathroom when he was… washing his hands.
• declaring "just as I suspected" when our hostess made a Connect Four move… he was pretty sneaky and mentioned in his thank you note that it was fun not just playing against himself (He's been having self tournaments as one of his ways to wind down before going to sleep.)

The toss the rock game 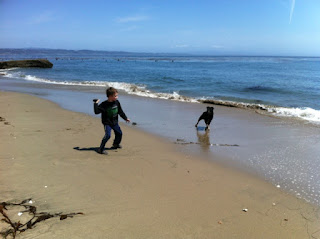 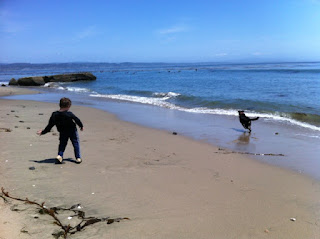 The picture he chose to evaluate (and the look is because I had the nerve to ask for a picture before going out to ice cream).  I highly recommend the website if you want to enjoy the art of the gallery! 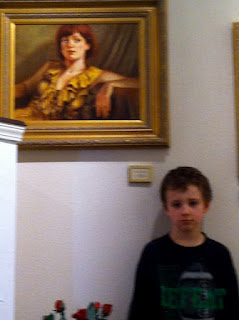 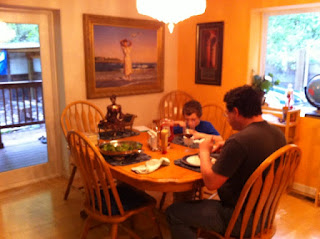 A ten minute walk out from that light house and I'm turning around to head back… really lovely even it's not my favorite ocean of crashing waves and cliffs.  It still smells glorious! 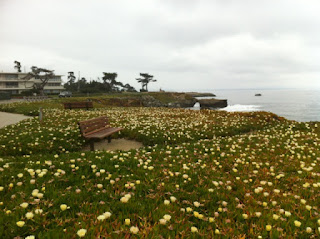 Field trip to a natural history museum, this is a whale sculpture that has a third of his class on it 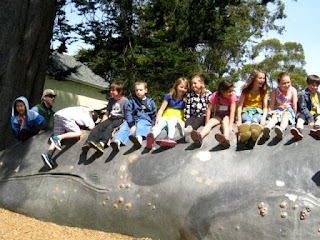 Posted by Lady Baker at 3:33 PM No comments: