After three days recouping, I'm enjoying the most awesome temporary housing situation!  I'm staying with my welcoming parents where I can teach my classes and Cameron can attend Lindamood Bell and Andrew can facilitate the sale of one home / purchase of the other.  So... while lots is still going on, our stuff is now in storage and we're enjoying this pause before the moving in storm.  Andrew will move in with his buddy in Oakland before the start of work at Groupon, March 1st.  Our new home will close in March, hopefully by the 8th.  I'll likely not be doing much blogging in this interim period, but I am having little sparkles like... I saw "42nd Street" with my dad and, today, I discovered a chocolate tea  with my mom that is the best one I've ever tried and it's herbal too!

Welcome to the February 9, 2012 edition of objectivist round up.  Considering I just got back from dancing with my husband and this Round Up covers Valentine's Day week, I thought a quote about love would be a great start to the edition:


Burgess Laughlin presents Making Progress: Should a movement have watchmen? posted at Making Progress, saying, "This posts suggests that a movement does need "watchmen," in any of a variety of forms, but those watchmen must be objective in their accusations -- offering specific evidence, an argument (a proof), and a clear statement of the indictment."

Edward Cline presents The State of the Reich posted at The Rule of Reason, saying, "Substitute “This Nation” with “Germany,” and I challenge anyone to fail to see the difference between Obama's State of the Union address and anything Hitler or Mussolini had ever written or spoken."

Andy Clarkson presents The Indispensables: Work, And Sex With A Woman You Love posted at The Charlotte Capitalist, saying, "The most important thing Dr. Leonard Peikoff has ever said...(sorry, you'll have to go to the link)."

Darius Cooper presents How're we doing on Unemployment? (Feb 2012 Edition) posted at Practice Good Theory, saying, "I look at how the U.S. economy is doing on the unemployment front"

Jason Stotts presents Contra Peikoff on Rape posted at Erosophia, saying, "My analysis of Peikoff's claim that in some contexts a woman cannot revoke her sexual consent. I wholeheartedly disagree."

Paul Hsieh presents Worse Than Death Panels posted at We Stand FIRM, saying, "I highlight a nice article from John Goodman of NCPA on why "evidence based medicine" is a dangerous to your health, despite its scientific-sounding name."

Edward Cline presents The Sticky Wickets of “Radical” Islam posted at The Rule of Reason, saying, "Here are some randomly selected excerpts from a British government report that treat “violent extremist” Muslims as victims or put-upon, passive, and helpless Islamic receptors of “extremism”"

Ari Armstrong presents Cake Bill Advances posted at Free Colorado, saying, "If successful, Colorado legislation will legalize cottage bakers, meaning they can bake goods in their home and sell them."

Diana Hsieh presents Video: Overcoming Perfectionism posted at NoodleFood, saying, "In Sunday's webcast, I discussed what "perfectionism" is and how a person can overcome it."


That concludes this edition. Submit your blog article to the next edition of
objectivist round up using our carnival submission form.
Past posts and future hosts can be found on our blog carnival index page.

objectivist round up, blog carnival.

It's official that we're moving... and soon!  We have our final round of movers estimates to complete on Monday, but we're hoping to make February the 16th the day.  So... lots of hustle and bustle and trying to make sure everything works as smoothly as possible.  Assuming nothing falls through, this will be our new house within the next two months!


-Very cool story found by Andrew regarding a slave's response to his former owner.
-Pithy quote from the documentary "Buck" that had Andrew and I laughing, "Blessed are the flexible for they shall not get bent out of shape."
-The Objectivist Round Up.
Cute antics:


• identifying a tune as from HMS Singapore instead of HMS Pinafore :)
• commenting on the tea warmed over the fire, "It's like firewood tea."
• noting during our loss of power, "Computer time is canceled… and I HATE that!"
• stating, "Love is disgusting and smoochy.  I'm never going to marry like that. [How are you going to marry?]  Like sarcasm."  (Hmmm, we'll give him some time.)
• telling us, "You don't know how real dying noises I can make!"
• continuing his love of the icky with, "That was way gross… I LOVE that!"
• vigorously attacking his reflection with foam sword and shield
• while experiencing a friendly and non distressing squishing, "I am feeling an extreme temptation to call names."
• as we teased him with all the idioms he knows he said, "Do not idiom me into shreds, mister!"
• properly embarrassing us as we rang the door bell to view a home… he shook the owner's hand and then promptly collapsed on the floor and played dead.
• after writing a sentence with poor grammar to which I said, "You don't say things that way." He replied, "Well it's the way I'm saying things; maybe I'm a new wave."
• building himself new chef concoctions which he always served himself with a fancy placemat and a full set of silverware:
-butternut squash sauce, crushed rosemary, sliced strawberries, and chocolate chips
-m&ms, strawberries, melted ice cream, paprika, celery salt, piece of jerky, yellow cheese, chocolate chips
-chocolate chips, brown sugar and two kinds of jerky, mixed in a bowl 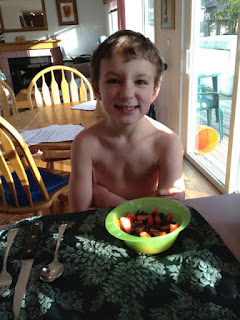