A Dark Time of the Soul: The First Few Years After Diagnosis

I’ve only recently realized what a dark time this was. I’ve written before about how my son was diagnosed with Autism at age three. But, what happened after that? Why does my blog start at age six? In those three years, I was struggling. I was struggling with the overwhelming challenge of what to do to help my child and, more fundamentally, with the fear of not being up to the challenge.

It’s only recently that I’ve been able to name the fear. What if I’m not smart enough, persistent enough, good enough to help my child? What if he turns out miserable and incomplete and it’s all my fault because I didn’t make the right choice. There are thousands of therapies and tens of thousands of research papers and so many recommendations to pursue. What if I miss the right one? What if I fail my child?  The anguish at even writing this is still so real.

Every choice was monumental. I remember breaking down in sobs because I wasn’t sure if I was requesting the right services in his first IEP meeting, and what if I wasn’t requesting enough, and what if I was settling for too little, and what if I hurt him in a way that couldn’t be undone? It is so scary and painful and there isn’t a reassuring answer for any parent in that situation. At least for me, “I’m doing my best” rang hollow if it wasn’t enough.  Now, I am better at being kind to myself than I was then.

Perhaps someday I'll go back and write about those years of intensive trial and error. I think I started writing the blog when he was six because I’d seen that whatever happened, he had a road to his own happily-ever-after. He was capable of choosing and on a path that he could eventually create the life he wanted. But, when he was so little, three years before, it was all my choice and all my responsibility and I was so scared that I wouldn’t be capable enough for him to reach that goal.

I still can’t talk about that fear and that time period without tears, but at least I’ve been able to name it finally and we grew past that point. My child grew into the six-year-old featured in this blog. He became bright, vivacious, and capable of communicating and growing with joy. I became able to share all the skills I’d learned in those three years with kindness. I loved writing hundreds of posts for the blog over those next few years. (Even now, when I write rarely, it has an impressive reach. )

Never have I been fully aware of the dark times when passing through. I’ve always been in coping-mode. Perhaps now I’ll be able to be more aware and more kind when dealing with those experiences and perhaps my experience will help others. Being kind to oneself is a cultivated skill that can be nurtured and made strong.

My child is now fifteen. I’m faced with the stress of teaching him how to drive and guiding him through college (because he chose to do that starting at age fourteen instead of high school). I have a brilliant kid who has his own set of challenges, but parenting this teen is not nearly the challenge of parenting my three-year-old, Autistic preschooler who didn’t know how to relate to the world and depended on me entirely.

What if my teen is too cocky and fails a college class? He’ll lose a bunch of money and have different choices.

What if he makes a driving error? He has the same risks as any adult and we are being super-sure he is well prepared.

What if his tendency toward black or white thinking loses him friendships or dates and causes him pain? He’ll develop his social skills in his own time frame and live with the consequences.

What if he gets fired from a job because he’s so blasé about hygiene? He will learn.

There is nothing—nothing—in parenting my child as a teenager that compares to the stress and agony of parenting him as a preschooler.

I will close with the status update that I just sent out to my son’s educational team. I coordinate about a dozen providers to help support him right now, but I doubt he’ll need that much longer.  Here’s to self-kindness through the dark times of the soul.

Cameron is now two weeks into his second year of concurrent enrollment. Last year, he succeeded beautifully in both semesters; he obtained 23 college credits and made the college’s Dean’s List. We did face several challenges which the team was able to address; the issues were mostly around communication with teachers and accurate self-assessment.

This semester, he is enrolled in thirteen college credits and one class at the high school. He has not received any grades yet, but seems super motivated to stay ahead. He decided that he was too cocky last year and barely pulled his grades up from C’s after several failing grades in assignments. He is motivated to avoid that struggle again.

He continues to struggle with adequately assessing the challenge of pre-planning for longer projects. However, he will get extra practice with that this semester since his literature class does not begin until October and will thus be conducted in an extra-concentrated time frame.

As usual, I ask that you contact me if you see anything failing. He has a very hard time admitting when something is going wrong. He has a tendency to go from denying a problem to rapidly spiraling into helplessness. As a team, we have consistently been able to help him grow and succeed.

Outside of school, he spent part of the summer being a Counselor In Training (CIT).  That was a huge stretch for him to transition from camper to staff, but he succeeded with some growing pains. He continues to volunteer as the vice-president of the Parker Chess Club and he recently topped several fourteeners with ease… he has quite the climbing abilities! As far as standardized testing, he got 1280 (99th percentile) on his first attempt at the PSAT this spring. Thanks for helping him overcome his challenges to soar! He really benefits from this caring team! 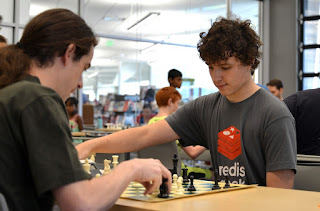 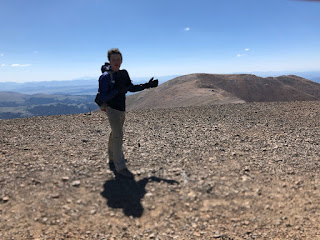 Yes, here's to self-kindness and to my beautiful child who will choose his own path. 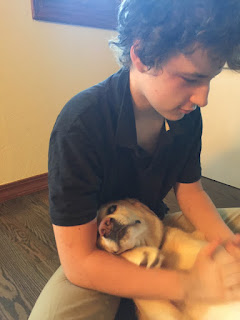