As usual, I'm keeping up to date on the latest research studies, treatments, and therapies recommended for Autism and, also as usual, rarely do I find myself persuaded that there is enough evidence to change our plan.  Autism is just such a broad category (spectrum), that the term tells you little about the particular kid and his/her needs.  Hyperlexia, however, has been a much more fruitful area for investing my time. (His diagnosis post.)  Of course, kids remain unique, but the advise and resources I find on the hyperlexia parenting list are almost always useful.


For example, I recently read this article which is just about the best summary of the reading issue that I've found.  Here are some key points:


"In his early developmental history, the hyperlexic child is not as alert to social cues as the average child. His gaze following, his ability to establish joint attention and his interpretation of posture, tone of voice, facial expression and other non-verbal cues lag behind his contemporaries. He's not a good psychologist, and he spends most of his time learning about abstract concepts. He has good memory for spatial as well as auditory patterns, and like a little scientist, he sets about investigating his world, and in the process discovers a lot of linguistic patterns, including the relationship between written language and the spoken word.

By the time the average hyperlexic arrives in first grade, he has been reading fluently for nearly three years, but he has only had about two years of conversational practice, because he started speaking late. This means he is ahead of his contemporaries in decoding written text and recognizing the relationship between written and spoken words. But he is years behind in drawing social inferences."
Yep, that about sums it up!  I do love my little scientist and he just started first grade :)  He came home the other day distraught because when he went to the office with a bloody nose, the staff joked in a friendly way, "So, you punched some one?"  Forget the smile, the friendly body language, the tone... that was an accusation in his book and he was upset. There's a reason my idiom dictionary is now in it's second volume.  My literal guy is learning though and he just sparkles when he uses an idiom... or makes one up for himself :)
"...Hyperlexic children are actually rather good at language. They pick out formal regularities amazingly well. They understand perfectly well how language works, as an abstract system of contrasts -- often better than the average person. What they don't understand is what people use it for! They have a people problem.
In order to help a hyperlexic child, you have to first put yourself in his shoes and find out what he experiences. In many cases, the problem is not with the mechanics of language, or even with the meaning of individual words. The problem is paying attention to the context.

Because it's much harder to learn language without access to the contextual cues, many hyperlexic children experience delays in acquiring language. However, once they do learn to speak, they often speak surprisingly well. Many idiosynracies in their speech are directly attributable to problems with joint attention, perspective taking and reference that changes with context.  They are not so much language problems, as problems of seeing the other person's point of view.
For instance, some hyperlexic children, (though by no means all), have difficulty learning to use first and second person correctly. If the caretaker says: "You want a sandwich?" The child may reply: "Yes, you want a sandwich," referring to himself as "you". The problem is not that the child doesn't understand what the caretaker means by "you". The caretaker uses "you" to refer to the child. The child doesn't see why "you" should mean something else when he is speaking. He doesn't understand that it's a matter of perspective taking -- that "you" means something different depending on who is speaking."
Yep.  I think almost all kids do this, but he was several years late in finally understanding pronouns and it certainly confused peers who tried to talk to him about toys.  So, kids thought he was odd and adults?  Well, most people just noticed the bumps in social interaction (lack of greetings, poor body language, topic changes), but it was baffling for me to talk with a kid who could read eighty page books and use high school vocabulary while talking like a toddler.  I'm serious, at four his vocabulary tested at the level for a 17 year old.
"There is a kind of boot-strapping going on when we read a text, or listen to someone else speaking. We draw inferences about the person's circumstances from what he says, and then we use this inferred context in order to interpret other things that he says. For instance...consider the following exchange:
"How much are the d--n sheep gonna cost?"
"You're outta luck. The price has gone up!" (From Wedding by the Sea).
If you ask the average reader whether the person who inquired about the price of sheep wants to buy sheep or sell sheep, the answer you'll get is: "He wants to buy them." But the hyperlexic child might not be able to draw this inference, even though he knows all the words in the passage and can use them properly as applied to his own life.
How does the average reader know? He can put himself in the shoes of a buyer or a seller, and he realizes that when the price goes up, this is lucky for the seller, but not for the buyer.
If we want to help a hyperlexic child to understand the meaning of "luck" as it appears in the average reading passage, we need to teach him more about people and what motivates them...  For instance, if you want to make sure the child understands the words "deck" [previously referenced as having 3 definitions] and "luck" [previously referenced as based on point of view], one way to do it is to take him out on the deck, bring out a deck of cards, and play a game of chance... It's a social problem, not a reading problem. If we manage to resolve it, the child will benefit in all areas of life, not just reading... "
Ah, well we're certainly working on it :)  It can take two hours to read an Ameleia Bedelia

book because of all the perspective changing which utterly baffles him!  It's just amazing to me how delightfully different kids can be and, while hyperlexia may be a bit more outside the norm, it's just one of the things that makes him unique and fun and different and a joy for me to parent. 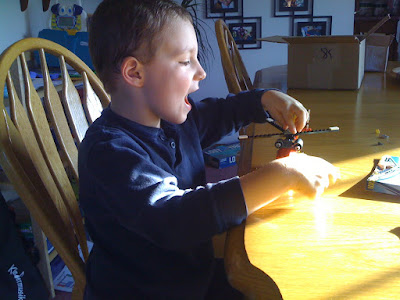 Lady Baker
The Pinery, CO, United States
Key players- Me: I have a passion for parenting. As my career choice for over ten years, I find improving this skill and relishing the process supremely rewarding. I also adore baking which used to regularly depart our home to bring cheer to school classrooms and my husband's work (but has decreased due to my focus on paleo nutrition). I'm a nurse, although no longer in clinical practice, and I spent several years as an online science teacher too. Andrew is my husband since a lovely fourth of July, 2000 and a computer engineer (http://oncodingstyle.blogspot.com/). I can't imagine loving him more. Cameron is my seventeen year old son. High functioning autism puts no dent in his vim and vigor. He is solid, exuberant thinking-in-motion. I adore parenting him, even when his "spirit" is making the air sizzle.